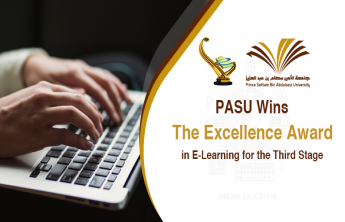 Within its continuous success in the e-learning and in open sources fields, PSAU received the Excellence Award. The results of the third phase were announced National Center for Excellence Awards.

It is worth mentioning that the University has won the first branch of the Excellence Award in its three phases (Initiators, Perseverance, and Distinguished) in the number of resources that have been shared to the community through the National Resources Platform (Shams). Such achievement was accomplished by the efforts of the colleagues from e-learning unit coordinators at the colleges that have enriched the platform: (Education /Addelam, Education/ Wadi Addawasir, Engineering/ Al-Kharj, Computer Engineering and Science in Al-Kharj)>

The colleges have contributed as a provider of educational resources from the production of faculty members and departments. The number of educational resources exchanged between the digital warehouse of the University and "Shams" Platform to 6000 suppliers, Which resulted in the university winning the National Center for e-Learning in the first stages, the second and third. Naming the winners was the in the result announcement of the participation of Saudi universities in enriching this national platform in the branch (Sahem). Moreover, the College of Computer Science and Engineering at the university was also awarded the Excellence Award for the "Antej" branch due to the number of resources it contributed during the current edition of the award. 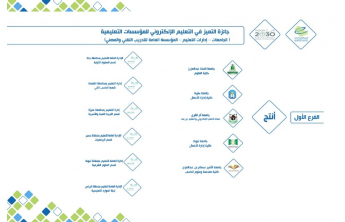 Administration of Public Relations and Media